Hacktivists React in Response to Scarborough Shoal Stand Off

the Scarborough Shoal stand off involving Philippines and China is now looming to be a cyberwar as well as hackers claiming to come from China and Philippines defaced top universities from each country.

for two weeks now, the hotly disputed islands in the South China Sea has been going and on friday (april 20), a group of presumed chinese hackers defaced the University of the Philippines‘ website by placing a Chinese script, “We come from China! Huangyan Island is Ours.” Huangyan is the Chinese name for the Scarborough Shoal. 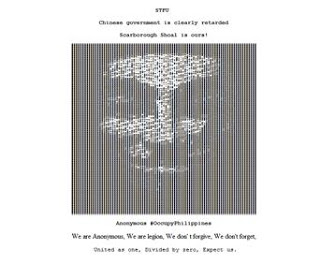 in response, the following day, it was found that the Chinese University Media Union was also defaced by Anonymous, stating “Scarborough Shoal is ours!” and with a loud screaming music playing in the background.  other segments of the website is still down as of this writing.