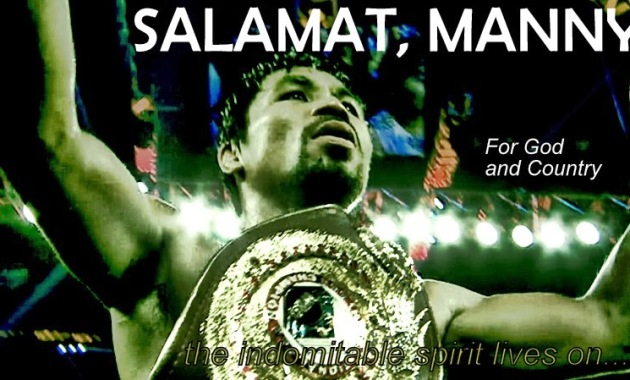 PILIPINAS.IT once again show full support to the PINOY-pride Manny Pacquiao. our champ is out to redeem himself and will try to rise up once more, this time against Timothy Bradley. Pacquiao recently won again […]

Manny Pacquiao is Back!

after two consecutive loses, the Filipino Champ Manny Pacquiao is back beating rugged Brandon Rios in a unanimous decision.Salamat Manny! A man of God will always rise up (when he stumble). […]

Over 50 Ways to Watch Pacquiao vs Rios Live Stream

living a tradition, PILIPINAS.IT once again shows full support to the PINOY-pride Manny Pacquiao. our champ has recently fallen twice but will try to rise up this time against Brandon Rios. last year, Pacquiao fell in […]

IT PINOY once again shows it’s support to fellow Filipino, Manny Pacquiao as he defends his WBO World Welterweight belt against Shane Mosley on May 8, 2011 @ 9am Manila time (May 7 – 6pm […]

it seems heated tweet messages from an IT PINOY to Sarangani-Congressman / seven-division-boxing icon, Manny Pacquiao finally got in his head as he decided to purge his Twitter account. Pacquiao […]